A Tribute to Frederick J. Jaindl

In addition to being one of the founders of American Bank, Fred Jaindl was a Lehigh Valley farmer, land developer, philanthropist, and banker. He spent his life in the pursuit of perfection, working to ensure his customers received nothing less than the absolute best. 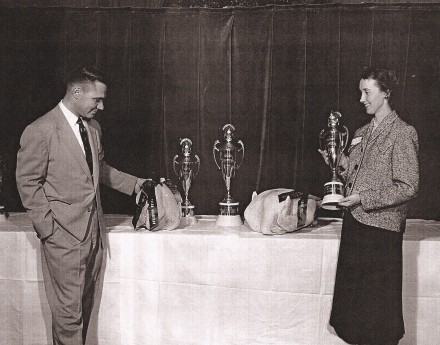 Fred began his career in 1937 after founding Jaindl Turkey Farms with his father, John Jaindl. He quickly grew the business and in a nineteen year-period expanded the sixty-acre farm to approximately five hundred acres raising 200,000 turkeys annually. Though his company grew at a staggering rate, Fred worked diligently to ensure his products were the finest; delivering to his customers a quality that went beyond their expectations. Jaindl Turkeys, winning their first national award for excellence in 1951, have been sent to the White House each Thanksgiving since the Eisenhower administration.

Under Fred’s direction Jaindl Farms grew to 12,000 acres, raising up to one million turkeys annually.

While running the farm, Fred began to acquire land throughout the Lehigh Valley. He was quickly recognized for his excellent foresight in the market and began purchasing and developing larger quantities of well positioned properties. Fred’s first land sale was to Murray Goodman, who bought land and developed what is now Cedar Crest Plaza in Allentown, Pennsylvania.

While Fred ran Jaindl Farms, Jaindl Land Company and eventually involved himself in a number of banking operations, he always made time for philanthropic activities. His contribution to Lehigh Valley Hospital made the Jaindl Family Pavilion a possibility at the hospital’s Cedar Crest Campus in Allentown, PA. The Jaindl Family Pavilion houses state of the art intensive care units, including a burn unit, trauma unit, pediatric and neonatal units, as well as adult medical and surgical intensive care.

In the early 1960’s Fred began to involve himself in a number of local banks, including Kutztown National Bank, purchasing stock when possible and building his portfolio. In 1976 he joined the board of directors at the First National Bank of Allentown, serving as Chairman of the Executive Committee. 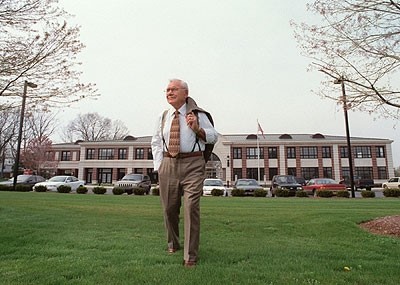 In 1986 Fred began purchasing stock in Sovereign Bank and joined the bank’s board of directors in January of 1988. A year later, Fred was elected the board’s new chairman and initiated a period of rapid growth during which the bank’s price per share soared. By 1992 the bank’s earnings were up 84.2% and 1993 earnings showed a 124% growth over 1992 financials. Fred retired from Sovereign’s board of directors in 1995 and announced his plans for “American Bank of the Lehigh Valley” a year later.

While Fred worked long hours in every one of his companies to ensure their success, he was always recognized for his unwavering honesty, integrity, and loyalty. He worked to deliver the products and services that the customer both expected and desired while never settling for second best.

Fred’s principles, focused on honesty and integrity, have become the foundation of American Bank’s mission statement and continue to be practiced by each team member every day.

American Bank is not endorsing or guaranteeing the products, information or recommendations provided by linked website.

American Bank is not liable for any failure of products or services advertised on this linked website.